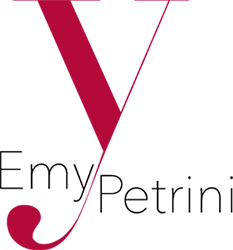 I love working in harmony with the Nature, with the Seasons.
It’s like the Nature would lead my hands. In my work I use the natural element in accordance with its habitat, its growth and the environment

She graduated in Interior Design at the Institute for Art and Restoration in Florence.

In 2007 she decided to develop her passion for floral art, she moved for a year in Wales and attended the advanced course in Floristry at Welsh College of Horticultur- Northop, obtaining the Higher Diploma in Floristry (ICSF). The course was detailed and complete, able to create an experience, able to design and implement, in any context, the presence of the flower and the natural element

Nature has given me a new freedom, it suggested new ways to rethink the identity and existence

It’s just in the silent observation of perfection and strength of certain trees, as well as the beauty of the natural cycle of life with its variety of colors, which Emy discovers a living Nature, that suggests  creation and impulse. Hence the decision to go to Wales to study in one of the most important European floral design school, where she spent a busy year, devoted entirely to the study. Back in Italy, Emy took part in several exhibitions and her work is noticed during “Artigianato e Palazzo” in Florence. Thus began a year of intensive work: working with the Replay, the company that made the nature of the characteristic element of its stores in the world; She works in Paris, Florence, Rome. In Berlin, she was entrusted with the construction of a 120sqm forest for the Bread & Butter trade fair, a majestic work, which has itself an extraordinary communicative power. The Enchanted Forest, this is its name, is a work much closer to an artistic intervention that a floral decoration solution.
It is precisely in tackling these jobs that Emy reunites as a protagonist in Spazio Officina. The work was noticed by the Academy of Catanzaro and Emy was invited to a symposium of sculpture in the National Park of the Piccola Sila along with other five internationally renowned sculptors. Inspired by the nature of the place makes a huge nest with bracken, gorse and branches, suspended between the ancient trees of the park ….

I walked in the woods for hours, and I started to collect branches, leaves, bark, shrubs, in these items was shaped, variations, improvisations. I started working with vegetal elements creating small assemblages and compositions

Emy Petrini has always sought in her life his own path that enriched herself with strong and sincere emotions. Is with this attitude that in 2000 she opened, not without difficulty, a beautiful space in Lucca, that talk about Art: Spazio Officina.
The intent of sharing this project with the city was not collected; so, as often happens, reality resizes the dreams and after a few years, Spazio Officina closes. Is at this time, which made easier by the beauty of the places where he lives, Emy finds comfort in a Nature that communicates great emotions.

In my work, what I try to do, is to stand in front of the plant materials I use, putting myself in a position of respect and listening